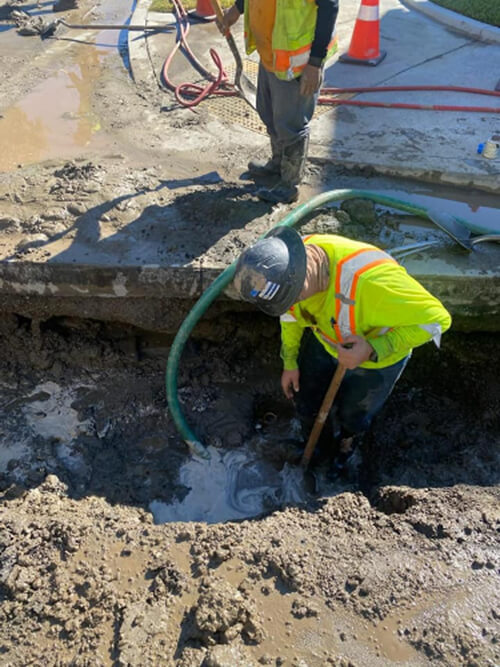 On a recent morning in the Los Angeles community of Culver City, residents awoke predawn to find their streets and yards under ankle-deep water.  A sixty-year-old water main had burst and flooded several neighborhood blocks in the area around McDonald and Orville Streets.

“I came out, and the first thing I saw was that the street was completely flooded,” said homeowner Alea Baron.

Artie Saldana, Division Manager at Precision Pipeline, Inc., says he got a call at four or five in the morning. “At that point the street and yards were already flooded,” he said.  “The water hadn’t gotten inside the houses yet, but if you don’t do something fast, the houses will flood within minutes.”

As panicked Culver City homeowners emerged from their homes in the early morning darkness, Precision Pipeline crews were already arriving to shut off and repair the broken main.  “Time is of the essence in emergency repair,” said Saldana.  “If we hadn’t gotten there as soon as we did, there would have been a lot of damage to the houses.”

But flooding wasn’t the only danger. The broken main, spewing 100 gallons of water per minute under some 80 pounds of pressure, generated a huge volume of mud under the street. The force of the mudflow ruptured the asphalt and collapsed the pavement, creating a large sinkhole.  Sinkholes are just as threatening to a home as floodwater, since large amounts of mud under pressure can flood homes almost as quickly as the water itself—and cause even worse damage.

And they’re dangerous.  Drivers often don’t see them and drive into them, especially in the dark.  Pedestrians can fall into them, too.

The eight-by-eight-foot sinkhole was nearly six feet deep. Crew members had to climb down inside of it to shut off the main before they could assess the pipe damage and begin the repair.

Sinkhole repair is a complex, difficult job that requires an experienced crew and specialized equipment for digging, excavating, and pumping.  It’s also dangerous. Safety precautions are critical in every Precision Pipeline repair job, requiring careful navigation of the sinkhole itself as well as skillful operation of heavy machinery.

It took five men working with trucks, backhoes, hoses, and pumps to shut off and repair the main. Once enough mud and water had been pumped out, the crew carefully cut out and replaced a ten-foot section of pipe from inside the flooded sinkhole.

The team completed the repair in a couple of hours, in time to prevent the mud and water from reaching the homes. The cleanup—pumping out the mud and water—took longer, which Saldana says is typically the case. But by midmorning, the water main and sinkhole had been repaired and the floodwater had been pumped out of the area.

Since a repair usually lasts for decades, a pipeline emergency may be a once-in-a-lifetime crisis for most homeowners.  But for Saldana and his crew, it’s all in a day’s work. Broken water mains are a common occurrence because of aging municipal water systems, and it’s not unusual for Precision Pipeline to get an emergency call every week. “I keep my cell on 24/7,” he said.

For the Culver City homeowners, it was a close call.  Had the repair not been made immediately, said Saldana, the damage would have been severe. Water and mold damage to homes costs US insurance companies $2.5 billion annually, and the average cost of a home water damage insurance claim is nearly $7,000. [1]

“The homeowners always thank us,” he said. “They’re so relieved we got there fast enough to save their homes from flooding.”